Lynn McDonald is university professor emerita at the University of Guelph. 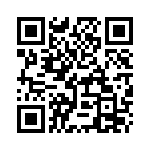